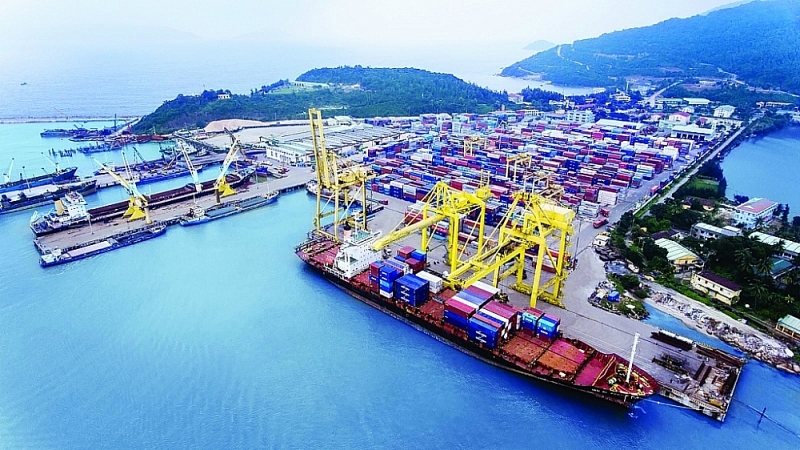 With many advantages in commodity production, especially agricultural, forestry and fishery products, along with a large open economy after years of actively integrating with the world economy, many multilateral and bilateral trade agreements have been signed and come into effect. Vietnam is one of the countries with large growth in merchandise import and export turnover in the world. Vietnam's import and export of goods exceeded US$100 billion (2007), US$200 billion (2011), US$300 billion (2015), US$400 billion (2017), US$500 billion (2019) respectively and 2020 reached more than US$543 billion. Although there have been many important results, making a great contribution to GDP, there are still shortcomings from goods import and export activities. One of the main shortcomings is the fact that the cost per container of import and export goods in Vietnam is many times higher than that of other countries in the region as well as in the world. Solving this cost reduction problem requires a comprehensive solution for the export and import of goods to make a further breakthrough. Starting from this issue, Customs News is publishing a series of articles reflecting this issue.

In 2020, Vietnam exported US$281.5 billion, an increase of 6.5% compared to 2019, one of the economies with the highest export growth rate in the world in the context of the Covid-19 pandemic; trade surplus was at a record high of US$19.1 billion, which recorded five consecutive years of trade balance surplus.

In the first three months of 2021, Vietnam's merchandise exports continued to record many positive results with an estimated turnover of US$77.34 billion, an increase of 22% over the same period last year; trade surplus was US$2.03 billion.

A review of the above numbers has shown more clearly the strong breakthrough in exports, the importance of exporting to a country with a large degree of openness like Vietnam. However, transportation has been and will continue to directly affect the competitiveness of export goods.

"The transporter" controls the game

As the owner of a company specializing in exporting agricultural products to many markets such as the US, Australia, Canada, Japan, the problem that Nguyen Dinh Tung, General Director of Vina T&T Group Company, suffered for many years is the high logistics costs.

"In 2020, the total value of agricultural exports of enterprises will reach US$48 million, of which about 65% is exported to the US. Abundant goods, good quality, cheap prices, but due to high logistics costs, even though enterprises accept a little "profit", the competitiveness of the product is not raised," said Tung.

To make it easier to imagine the cost of logistics in the product prices, Tung specifically said: "1kg of dragon fruit transported by air to the US sells for about US$7-8/kg, peaking at US$10/kg, of which US$1 is to pay farmers, US$1 for the factory, US$1 to pay for irradiation, so the company has a profit of nearly US$1.”

Moreover, Vietnamese export enterprises are always in a passive position. Currently, almost all cargo airlines are foreign. Vietnam Airlines only flies some flights to France, Australia and Japan.

When foreign airlines work with each other, enterprises suffer. Not only that, if there is a shipment from China to export to the same market as Vietnamese goods, airlines will usually give priority to Chinese goods.

Tung said: "Every time Apple launches a new product, it is difficult to import electronic components from China, which makes it very difficult for Vietnamese exports. Airlines will give priority to shipping electronics from China for export, because electronic goods or components are of high value, each phone has a great value, so they are willing to pay US$6-7/kg for outgoing goods.”

This lack of initiative also happens to exporting goods by sea when most of them are foreign shipping lines. In addition to constantly being subject to an increase in shipping rates, exported goods also sometimes fall into the situation of refused transportation.

At that time, the goods were containerized, even going to the port, forced to return or sell cheaply in the country, some are even damaged. That is not including the cost of compensation for the contract.

The story of Thuan Phuoc Commercial Fisheries Joint Stock Company is a typical example. Tran Van Linh, Chairman of the Board of Directors of the company, was frustrated when sharing the recent story that this company had booked a place to bring frozen seafood to the US with MSC shipping company but had not yet been able to export, the MSC shipping company responded.

They no longer accept reefer containers to the US.

“We have to find another shipping company to replace them, however, this search is not easy because businesses do not have many options because the number of reefer containers is less than normal. But in order to keep prestige with partners, in accordance with the terms of the signed contract, enterprises had to do this and accept no interest," Tran Van Linh said.

Making an immediate comparison with the goods of neighboring Thailand, Nguyen Dinh Tung, General Director of Vina T&T Group Company, said: “Logistics costs are so great that many Vietnamese products are in the same category as our products. Thailand has fierce competition in the world market when their goods have lower costs and lower selling prices. Thai airport currently has the presence of 200-300 airlines. Airlines compete with each other to have the best shipping costs, while in Vietnam currently there are only 4-5 airlines.”

Vo Quan Huy, General Director of Huy Long An Co., Ltd. said that in 2019, the company exported about 14,000 tons of bananas to Malaysia, Singapore, and South Korea, of which logistics costs accounted for about 30% of post-revenue costs. In the first six months of 2020, logistics costs increased by 45%, of which shipping rates increased by 40% due to the effects of Covid-19.

Le Van Quang, Chairman of Minh Phu Group Joint Stock Company, said: “The cost of transporting a container of shrimp from Vietnam to the US is only VND41 million, from Vietnam to Japan is VND16 million, but is VND10 million to Ca Mau from Ho Chi Minh City, and VND80 million to Hanoi. Similarly, from Ho Chi Minh City to the Chinese border, it costs VND100 million. Meanwhile, Ecuador also ships to China, thousands of kilometers away, but the cost is less than half. It is worth mentioning, not stopping at the above figure, each year logistics costs increase by 25% on average. Particularly, in the first six months of 2020, it will increase 45%, including 30% increase in shipping freight, and nearly 15% increase in shipping line's surcharge.”

Hundreds of fees spent on goods

According to a survey at a seaport in Ho Chi Minh City, for a 20-foot dry container, the loading and unloading fee at the jetty is VND470,000/container, operation at the yard with the stages of container down, shipping costs from VND210,000 to VND560,000/container, not to mention some surcharges for overloaded goods, lifting surcharge at the yard, which can be from 50% to 200% of the normal container price depending on the loading area and agreement.

Truong Van Cam, General Secretary of the Vietnam Textile and Apparel Association, said: “Since 2017, seaport fees in Hai Phong have been recommended by businesses and associations to decrease many times, but so far the reduction is negligible. For example: Hai Phong Port has reduced costs for bulk cargo from VND20,000/ton to VND16,000/ton, down from VND250,000/20 feet container and VND500,000/40 feet container to VND230,000 and VND460,000, respectively.”

Cam said that these costs are still very high, especially in the context that businesses are still facing difficulties when dealing with the Covid-19 pandemic.

For example, the freight for a container from Hai Phong port to major seaports in Europe has increased from US$1,000 per 40-foot container by the end of 2020 to US$8,000-9,000 per container by mid-March. This shipping price does not include surcharges such as documents fee, loading and unloading fee, lead clamping fee, cleaning fee.

According to Phan Thong, General Secretary of the Vietnam Goods Owners Association, whether the cost is due to supply and demand as well as the agreement between the business and service providers in the transportation and distribution of goods. But the important thing is that Vietnam's transport infrastructure is pushing up the transportation costs. For example, the Hanoi - Hai Phong expressway is very big and beautiful, but the high cost means container trucks still have to choose to follow the old road. The phenomenon of overlapping charges, collecting many types of road maintenance fees also causes difficulties for businesses.

The fact that the logistics costs are too high, accounting for a large proportion in the cost of import and export goods, is a long-standing problem, reducing the competitiveness of Vietnamese goods in the region and in the world.

Many reasons have been pointed out and many solutions have been mentioned, but up to now the root problem has not been solved. For a country with an open economy, with the strength of exporting agricultural, forestry and aquatic products, it is very important to soon have a comprehensive solution to reduce costs and improve competitiveness for goods.